Everyone knows the feeling: setting your sights on a new country, researching it, making plans, lapping up all the stories from people who have been. Before you even set foot out of your front door you’ve created your own fantasy version of the mysterious new land you’re about to enter. Throughout the whole journey, you fizz with the excited anticipation of matching reality to your dreams.

For me, this is half of the fun of the adventure. Like most things in life, I like travel to be 50% dream and 50% reality.

But my 2014 trip to Morocco taught me a valuable lesson. A lesson that no travel guide, documentary or friendly anecdote can teach:

The greatest part of the adventure is finding the things you didn’t know about; the pulse of the country that exists far beneath the carefully crafted touristic face paint.

The trip was a standard spontaneous 10-day get away as a reward for making it through our third year of university. Four days in Marrakech soaking up the notorious vibrancy and vigor of the ever-infamous city; five days in Essaouira, a place we could barely pronounce let alone knew anything about. But we’d heard it had a beach, and five days of sun, sand, and sea can never really do you wrong. Marrakesh was an eye-opening experience: vibrant, colorful, frantic and full of life – everything you’d expect it to be. However, it wasn’t till we set off for Essaouira that the unknown made itself known.

We planned to get a coach between the two cities and, assuming it would be simple enough, we arrived at the station to find all the coaches were full. The train station around the corner couldn’t offer us a solution as there were no rail links where we wanted to go. Reluctantly, we poured into an over-crowded taxi with a French couple we’d just met and, sitting on each other’s knees, embarked on what was set to be a hot, stuffy and cramped three-hour drive.

It wasn’t till, staring lazily out the window, a cloud of seemingly flying goats whizzed past my eyes that I realized we’d made the right choice. Before the sight had time to register, another goat cloud flew by. Fortunately, the driver had noted our surprise and pulled over to show us the reason for the phenomenon. The goats were put into trees, by local farmers, to eat the seeds. Once the seeds were digested and had passed through the system, broken down by the animal’s stomach acids, then they were made into the much-loved Argan oil.

You learn something new every day, especially when you throw caution to the wind and embark on possibly the most illegal taxi ride you’ve ever experienced.

The next surprise came as we arrived – or at least tried to – at our hostel. From my experience of Morocco, struggling to find your way around is part of the package. However, locating our pre-booked accommodation in the winding streets of Essaouira seemed impossible. The place we were staying had been suggested to us by a friend, and we had no idea what it looked like, where it was or how we were going to find it.

After a good few hours of aimless wandering, and the occasional argument, we stumbled upon a doorway with the word ‘Cloud 9’ marked just above it in very faint marker pen. The door open and I said my name. ‘Oh, Abbie’s friend Sarah?’ came the response. I replied with a somewhat confused ‘no?’ Little did we know, but we’d just begun what was going to be the greatest hostelling experience I’d ever had.

The hostel staff were a group of intelligent, open-minded Moroccan graduates – and a drunk Spanish man called Youssef who’s only real job appeared to be sleeping on the patio and stealing wine from guests. (We loved Youssef.) Apparently, the venue was unregistered but they’d started the business to meet travelers, as traveling on a Moroccan passport is, sadly, very difficult.

However, the environment they’d created was unmatchable. They said from day one it was our home-away-from-home and that could not have been more accurate! Every night they cooked dinner with their guests, each evening was spent playing music and enjoying a smoke and a drink on the terrace; they took us to restaurants, bars and even to their favorite surf spot on the beach. We gained a family from staying in that place, and it was all because we chose to trust a recommendation rather than do the research ourselves! 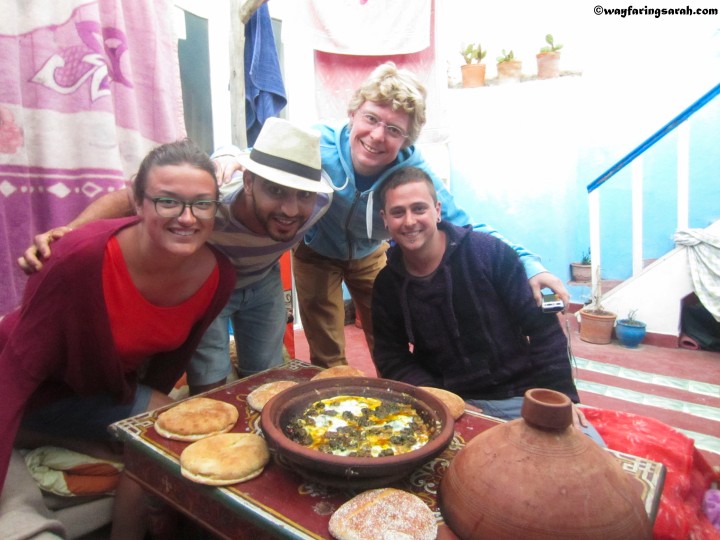 In Marrakech, we’d heard whisperings about a festival happening in Essaouira while we were planning to be there. Now, as someone who has been to my fair share of festivals, I was excited but also pretty sure that it wouldn’t be that surprising of an event – I could not have been more wrong. As we pulled up on the bus there were stages set up everywhere and, after arriving at the hostel, we discovered the whole group were planning to check out the music that evening.

The Gnaoua Festival has been going since 1998 and is one of the largest free festivals anywhere in the country. It celebrates the country’s heritage and encourages world music artists to come from all four corners to help express and rejoice their roots. Groups of traditional and authentic desert drum groups share the stage with world-renowned recording artists to create a weekend of truly eclectic and exciting performances. We started drinking before going out and, after being assured by our hosts that foreigners are allowed to drink even if most locals don’t, we carted our bags of wine down to the beach with us and got ready to party.

Then, the real surprise hit. As the music started and the crowd riled up, I suddenly began to feel very alien. All the people around me were filled with lively passion and excitement, overjoyed at the opportunity to watch the live music. A little voice piped up in my head, wondering why – if all these people were enjoying themselves – did I feel like I had to drink to be on the same vibe. As I mentioned, I have festival-ed all over the world, and the one common theme is the need for intoxication.

For the first time in my life, I suddenly realized that drinking alcohol and having fun weren’t necessarily dependent on each other. All it took was a quaint little festival in a largely Muslim country to question the error of my ways. Sure, there’s nothing wrong with enjoying drinking, but feeling like you need it to have fun is a whole other story. The unexpected realization that I had in that unexpected festival changed my life forever! I’ve since been to many events and stayed completely sober!

The final surprise on our trip came in the form of delicious Moroccan cuisine – by far my favorite element of the trip. Although tourism in this country hasn’t been completely westernized and buying from the many, many street food stalls still guarantees you a delicious meal, it wasn’t till a chance encounter in Essaouira that I realized just how incredible local food could be.

The night market stalls in Marrakesh, lined up side by side on the main square, will all happily admit that it’s the ‘same sh*t, different stall’ and the tourist centred restaurants churn out lemon chicken tagines as if they’re going out of fashion! However, the Essaouira fish market doesn’t drop any popular names or come with a snappy tagline to entice buyers.

We were fortunate enough to be taken down to the seafront market, where the catch of the day is hauled straight off the boat and onto the market stalls, by a Spanish girl who had fallen in love with Morocco and made it her permanent home. We watched in awe as she skilfully haggled bags of fresh sardines and other shellfish. She then took us a back into town to a café where, for a small fee, they’d cook your fish for you. Although the putrid, fishy smell of the eatery put many of our group off, the bravest of us sat down to try the local delicacies. The fish are simply cooked in a fire grill and served with bread and salad and, I kid you not, it was the greatest seafood I’ve ever eaten.

No five star London restaurant or fish specialist chain that I’d ever tried could even hope to live up to the beautiful, subtle and mouth-watering taste of this fish. The simple sardines were salted, crispy and flaked off the bones with ease. The other dishes were an equal explosion of taste. All in all, the universe had gifted us with a real gem of a travel experience that we never expected to have.

The People You Meet & The Places You Go

My trip to Essaouria helped me understand the real benefits of travel. Sure, no matter where you go you can meet great people, learn about the country and culture and experience amazing things. But it’s not until you really give into the situation and let the experience guide you that you find the real treasures of the trip. The unexpected teaches us the greatest and most poignant life lessons and any traveler should remain open and willing to be lead by the power of chance opportunities.

Are there any countries where you found unexpected bliss? Or have you had a different experience of the beautiful and wondrous Morocco? Be sure to leave a comment below and continue the discussion!

33 thoughts on “A Travel Lesson About The Unexpected – From Essaouira, Morocco”

Travel, health and wellness blogger. Sufferer of many chronic illnesses, but that's not going to hold me down. Twitter: @wayfaringsarah View all posts by Wayfaring Sarah 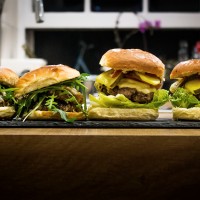